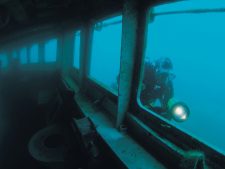 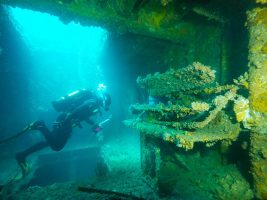 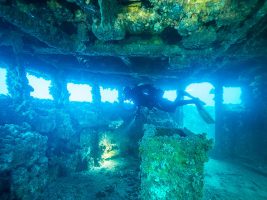 The ex HMAS Hobart was a Charles F. Adams class guided missile destroyer in the Royal Australia Navy (DDG 39), built in the United States of America and commissioned in 1965 in Boston. The vessel completed three tours of duty off Vietnam and in 1968, two sailors lost their lives and seven others were injured after the vessel was hit by “friendly” fire. The Hobart was sunk in November 2002 as an artificial reef and lies in 30 metres of water approximately 4 kms off Rapid Bay. Access is by boat from Wirrina boat ramp and a permit system applies.

The 134m wreck is located within the Rapid Head Sanctuary Zone – part of the Encounter Marine Park. All Plants fish, other animals and the shipwreck are protected. It takes several visits to see the whole wreck and it caters for many levels of diving experience.

Advanced and Nitrox Certification is highly recommended for this dive.

The wreck ideally is accessed on a dodge tide and care must be taken by boat operators to ensure safety of surfacing divers and of the decent lines to avoid fouling propellers and/or cutting through lines.

The site is regarded as one of South Australia’s, and even Australia’s, premier dive sites, complementing the other fantastic diving locations in the region including Port Noarlunga Reef and Aldinga Reef.

Management of the site now rests with DEWNR, in cooperation with South Australian Tourism Commission and Department of Planning, Transport and Infrastructure. The HMAS Hobart is managed as part of DEWNR’s marine parks operations. The needs of divers and dive tour operators, as well as the wreck and its marine life, are given the highest priority at the site.

To dive the HMAS Hobart wreck a permit is required. Permits are valid for 12 months and can be obtained online today.
If you are diving as a group, each member of your party must have their own individual permit and if you are a commercial tour operator, you will also need to apply for a marine parks permit.